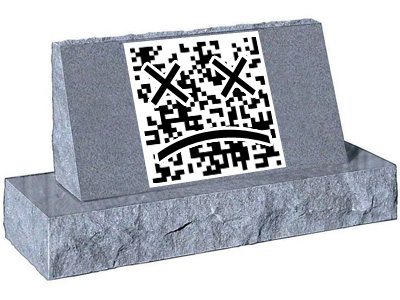 At the upcoming Xplor conference I will be the moderator for a panel entitled “Are QR Codes Dead?”

Whether you believe they are or not, it is interesting to me that it is even the topic at a conference. Seems a bit soon, or maybe not.

A bit of history …

2D barcodes have been around forever. The first use of barcodes was to label railroad cars, but they were not commercially successful until they were used to automate supermarket checkout systems, (UPC) a task for which they have become almost universal.

The very first scanning of the now ubiquitous Universal Product Code (UPC) barcode was on a pack of Wrigley Company chewing gum in June 1974. For more check out Wikipedia

The issue in the use and adoption of barcodes was not the applicability but the need and commercial availability of the reader. So why is there such a sudden surge in popularity?  Look no further than your smart phone, which provides free QR code reader applications.

So now that scanners are available to the masses what is the problem?  QR codes are everywhere but like any technology some people do a great job optimizing and others don’t.

The barmaid asked me what I was doing. I explained that I scanned the QR code gave her a good review on her service and the restaurant. Her comment “I was wondering what that square was.” She asked the other bartender if he knew what it was for, the answer “no”. We called over the manager and heard the same answer.

A for the concept and an F for implementation. It was a great program, but worth very little, due to poor implementation. Note: I did receive a nice email from the VP of Marketing thanking me for participating. I shared my experience with him. Will see what happens when I go back.

There are great examples of very successful QR applications. But it is all in the presentation.

Every technology has a shelf life. Do you think QR codes are reaching the end of theirs?